Why is Norway killing wolves? 2 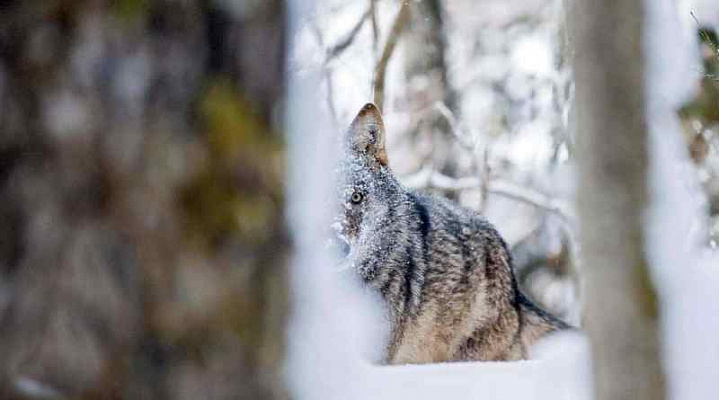 The rural communities in Norway struggle with the desertification syndrome. Many young people move towards cities, hoping they will find better jobs there. The young adults that stay behind are the so-called ‘stayers’. They are the working-class, often sharing a passion for traditional hunting. Their opinion on large carnivores is clear: a limited number of lynx, wolverines, and even bears are accepted. But they will never accept wolves.

The wolf population in south-eastern Norway grew since the ’90s. Their arrival to new areas paired with growing concern from farmers, hunter and thereby also the local communities. Norwegian hunters united with the aim to exterminate the wolf from their hunting grounds. However, this requires adaptation of the national legislation and exemption of the international law. Until now, Norway has not been able to give full clearance to kill the wolves, despite continuous pressure.

A close network of hunters
According to the article, two concepts play an important role. These are the so-called ‘cultural resistance’ and ‘the Hammertown mechanism’, based on Paul Willis’ book Learning to Labour (1977). The cultural resistance does not necessarily fight the authorities, nor does it want social changes. Cultural resistance is a form to fight for an autonomy, to gain control over a part of your own life. The ‘Hammartown mechanism’ describes how different people end up in different social classes, due to their own actions in life. It may lead to autonomy in one level, but exclusion in other levels of society. The scientists found that the rural young men who liked to go hunting, were a normal part of society. Yet, looking at their contacts, the hunters formed a close network, as a separate group of people.

Direct hunting competition
Many locals see hunting as a form of traditional outdoor recreation. The reason for this is that during the 20th century, all large carnivores except the lynx were absent in Norway. Wildlife populations of ungulates, like deer and moose, flourished. To manage the growing numbers, many rural communities practised hunting as a form of income. This was either directly to serve food on the table, or indirectly to earn money for shooting the quotas. Now, Norways hold populations of lynx, wolverines, brown bears and wolves. The hunters feel their presence as direct threatening competition, while they actually help natural biodiversity.

Conflicts between cooking and shooting
Hunting in Norway is very masculine. Sons learn from their fathers and grandfathers the traditional ways of hunting. In modern society, the traditional masculine hunters also uphold the modern expectations. The young hunters who started a new family, did as much cooking, cleaning and caring as a modern family in urban areas. Thereby, a conflict between the masculine traditional way of life and the modern equality principles grew. But the forests changed as well. While the forest used to be a safe playground, shaped by humans, the new carnivorous inhabitants altered that. In the traditional view of the current hunters, the wolf does not belong in Norway. The Norwegian nature had to be a place for people and dogs to enjoy a walk. A place where wildlife had nothing to fear, except the hunters.

The hunters’ hate
The rural Norwegian hunters seem to respect the wolf as an animal. It is a great hunter, with competences that hunters and their dogs can only dream of. But they see the wolves’ presence is a threat to the hunters’ way of living. Still, hunters do not despise the wolf as an animal, which just follows its instincts. It appears to be the people who speak for the wolf, who have triggered the hunters’ hate against wolves.

The rural hunters usually see urban areas as bad, chaotic places where nature is absent. The alliance of politicians, resource managers, scientists and environmentalists that form the pro-wolf lobby, thereby become antagonists of the natural rural way of life. The city people see the wolf as part nature, while the rural people came to see the wolf as the idea of the urban population. The wolf became the icon of urbanisation, which is the biggest threat to their rural existence.

The growing gap between city and rural lands
Now that the wolf is returning on its own power, hunters are confronted with the urban view of nature. And it is the urban way of living that the hunters tried to avoid, by staying behind in the rural regions. The rural communities often feel ‘powerless’ against the urban population, thereby a strong feeling of resistance grows with the returning wolf. There needs to be only 1 extreme hunter that starts killing wolves, and the media displays the rural community as wolf-killers. The misconceptions, misunderstanding and mistrust between the city and rural land thereby further grow. But the hunters remain the underdogs.

The hunters have lost their trust in city people, including the academic people. They believe that scientists are part of the subjective pro-wolf group. The hunters believe their own observations, while disregarding scientific studies that modern society holds as highly valuable and objective. Meanwhile, European countries show examples that prove how cooperation works. Germany agreed on a common strategy for the wolf, could a comparable solution solve the problems in Norway?
Back
+7 (926) 866-14-52
info@wolfhuntersclub.ru